According to the Treccani encyclopedia, “The English term ‘design’, which literally means ‘plan’ or ‘drawing’, refers to the process of conceiving any type of object, such as a piece of furniture, a car, a coffee maker or an electronic device. The designer, very often an architect, is in fact the person in charge of planning the realization of a product, carefully examining, whether through paper or computer drawings, through simulations and analysis of materials, the item’s efficiency and usefulness but also the agreeableness of its forms (…)”.

However, design, as we currently understand it, has undergone some rather important transformations and developments over time. Indeed, with the Art Nouveau movement, objects began to be conceptualized with greater simplicity. Inspiration was sought from nature, and attempts were made to reproduce not only her beauty but also her functionality, a concept that would become increasingly significant.

Since the early twentieth century, the concept of design has moved ever closer to today’s notion of it. The great transformation occurred precisely in terms of the criterion adopted, in that all objects, from a drinking glass to a building, had the same design approach.

The unity of the arts was established as the predominant idea, and simplicity, beauty and functionality became the essential points.

This modern design concept also brought together several production models which, while still associated with a greater level of artisanship compared to today’s, represented the beginning of a transformation. One of the most famous examples among these is the Viennese Workshop (Wiener Werkstätte) founded in 1903 by Josef Hoffmann, an architect, Koloman Moser, a graphic designer and painter, and Fritz Waerndorfer, an industrialist and art collector. The Workshop was in fact one of the earliest examples of the artisan’s integration into the economy.

Moving from the futurism of Giacomo Balla (who knew no boundaries between a suit and its rack), to the renowned Bauhaus school (where teaching cut across all the arts), and from the resulting rationalism to currents such as the Memphis design movement (which emerged to oppose essentiality), the concept of design as a democratic method embracing multiple objects and elements became more and more established, irrespective of the formal expression it adopted.

Today, design is being extended to include not only objects but also the digital sphere.

Guided by this forma mentis, Ceramiche d’Italia (CEDIT) offers collections that stem from concrete ideas and express the mindset of Italian architects, designers and artists, along with their concept of design as applied to porcelain stoneware – a design object.

RILIEVI | The alternation and symbiosis between concave and convex, recessed and raised. 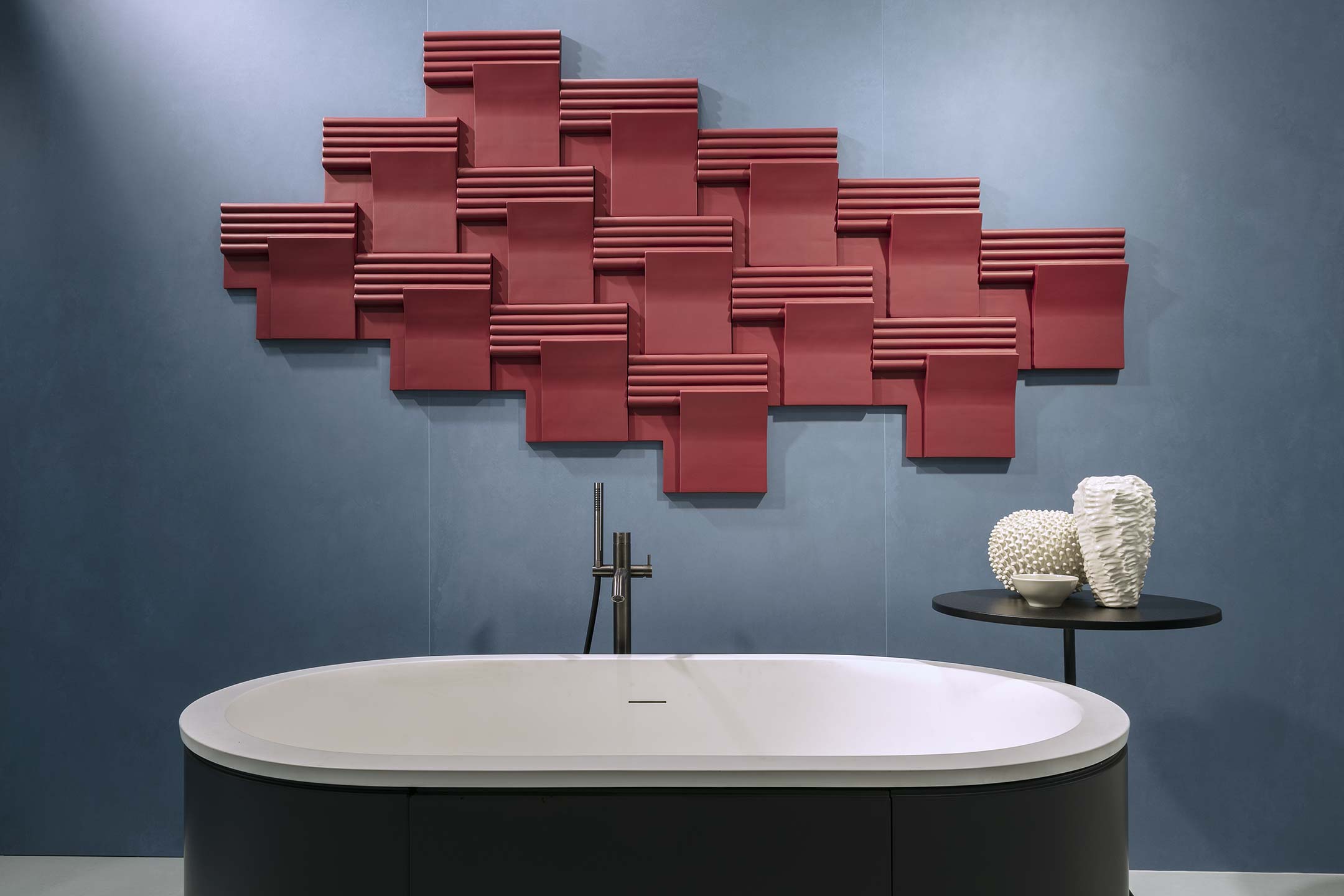 The Rilievi collection by Zaven is the upshot of an elaborate design process that starts with a refined yet virtuoso combinatorial work between two basic elements – a large ceramic slab and an overlying three-dimensional “relief tile”. The ways in which the two “ingredients” combine can vary depending on their numerical multiplication, the laying arrangements of the slabs, the shapes obtained by placing the relief tiles one after the other, and the combinations and juxtapositions between each of the items in the collection.

“Rilievi” is a design invention poised between different historical periods. If, on the one hand, the volumetric modules of the relief tiles draw inspiration from certain expressive experiments conducted in Italy in the 1960s and 1970s, the large-format slabs are the fruit of research into materials and technology that has achieved unparalleled standards of quality in recent times.
The play of shadows on the surfaces of the slabs, generated by the light striking the projecting parts of the modules, creates a singular effect of architectural depth that has few equals in the specific field of ceramics, and lays the groundwork with which to explore an innovative decorative motif for interior spaces.

EURIDICE | The mystery and poetry of painting. Art that inhabits space. 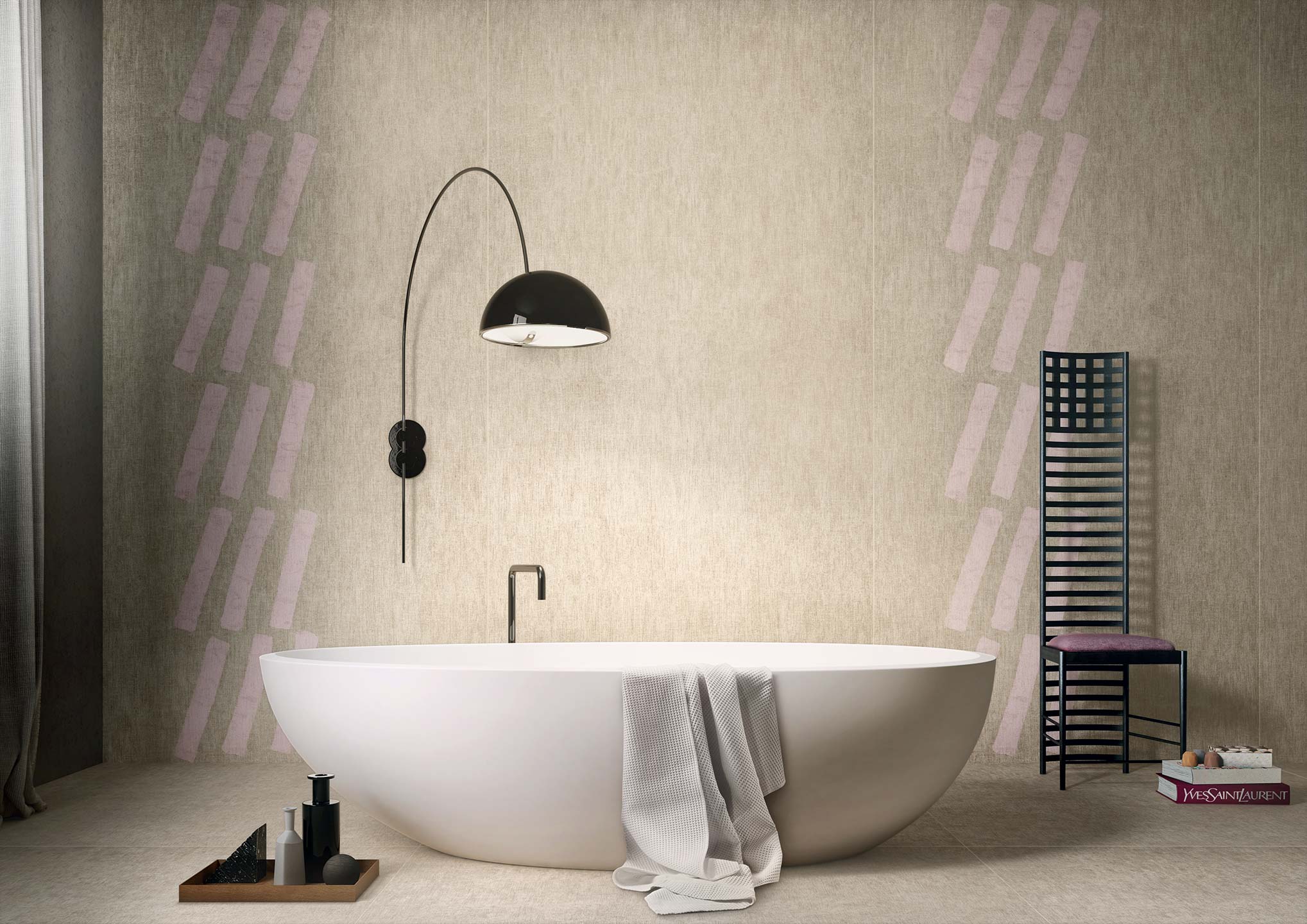 In their apparent simplicity, the distinctive traits of the “Euridice” collection embody an extraordinary complexity of references derived from the history of painting, even encompassing the memory of gesture taught by the Paleolithic people. If it is true that “the past is not a father to be killed but a mother from whom to draw nourishment”, then the poetics of this series of elegant wall ceramics does not aim to unveil a specific, distinctive or absolute truth, but rather to propose a sublime use of porcelain stoneware which, likened to a raw canvas, defines a work that remains partial and infinite at the same time.

“In the past, art was expected to transfer the object, or work of art, from the inanimate to the animate world. Now, since we know that the whole world is animate, the task of the artist is to interact with the intelligence of matter”. Giorgio Griffa

MATRICE | An atlas of modular signs in a multitude of combinations. 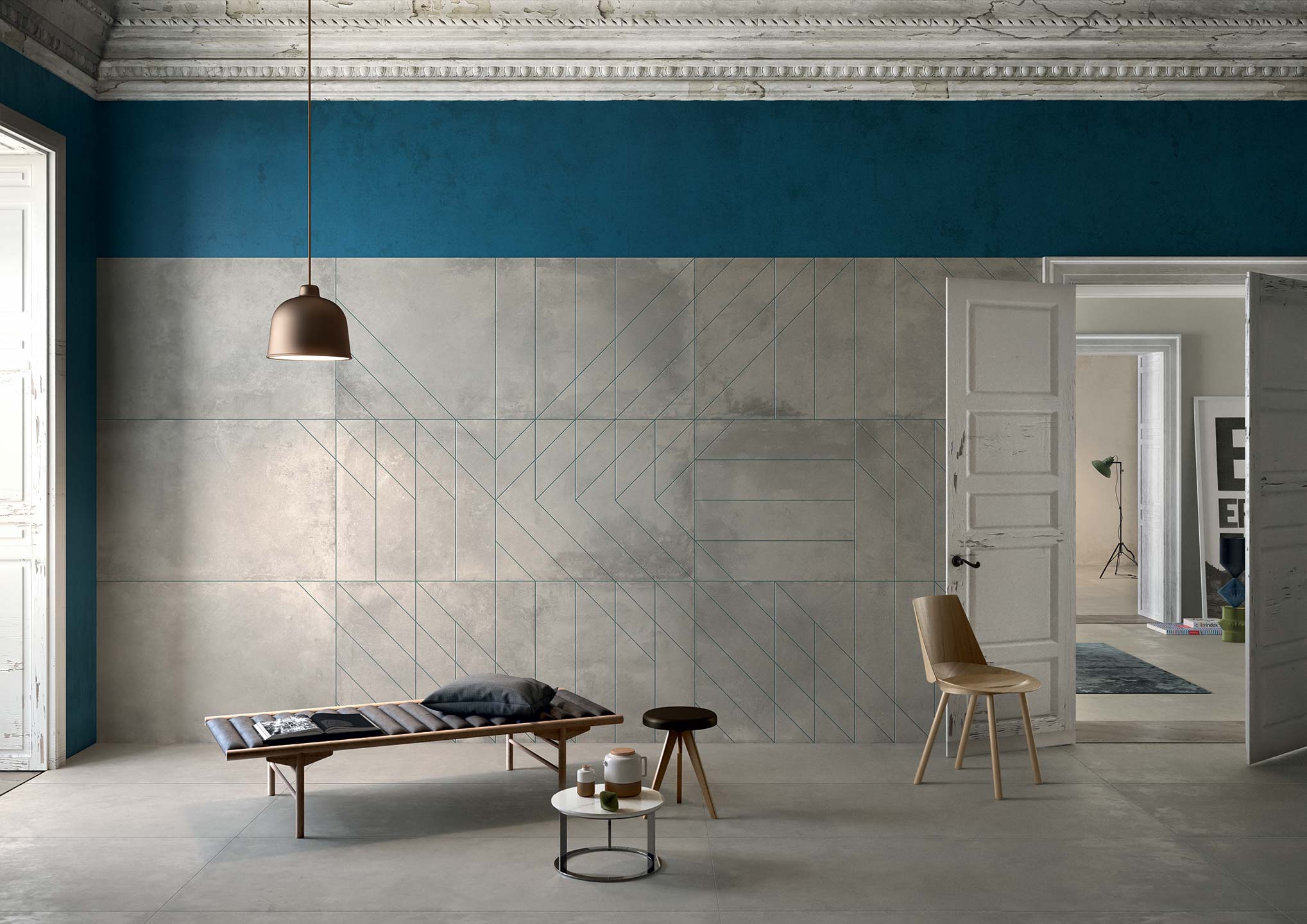 By making use of suggestive elements peculiar to Italian modernist architecture and exploring the particular harmony of the exposed concrete scores of some of the compositional solutions resulting from that creative epoch, the design of “Matrice” led to the reinvention of a series of finishes applicable to porcelain stoneware material. This gave rise to the possibility of obtaining original and ever-changing combinations of the various ceramics included in the collection, so as to create decidedly intense dwelling environments with powerful personalities.

“We love concrete as a material, its versatility and its plain, austere look. We have completed our carefully designed surfaces with graphic patterning inspired by the human actions of weaving and embroidering”. Barbara Brondi & Marco Rainò.

ARCHEOLOGIE | The poetics of the wall. The forgotten wall. 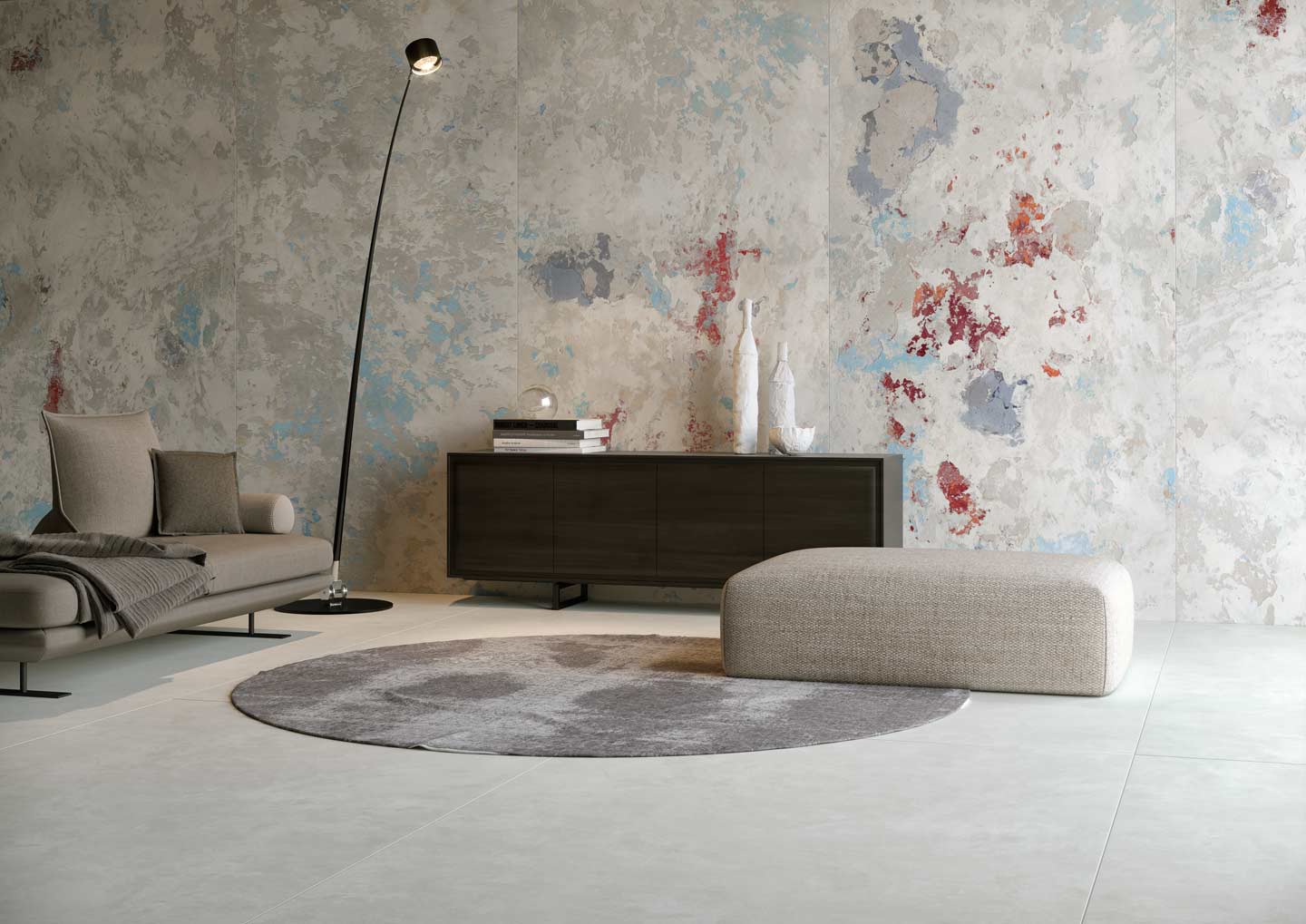 Works of art can be placed at the service of decoration, enabling the construction of truly large-scale pictorial “environments”. In the “Archeologie” collection, porcelain stoneware surfaces take on the consistency of a new, extraordinary portion of space onto which the author transfers and deposits some salient traits of his or her personal poetics as an artist, developing a contemporary wall covering proposal that, from a visual perspective, has the appearance of a colored mantle destined to survive the tests of time and become a memory.

“A wall is like a book to be opened, a journey into the interior, revealing the experiences, memories, signs and symbols which this fragment of masonry has absorbed over the centuries”. Franco Guerzoni